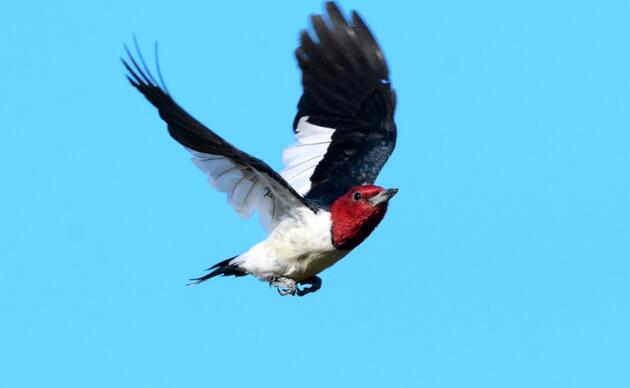 Adorned with a bright red head and tuxedo colored body, the unmistakable Red-headed Woodpecker was once common in central Indiana. With each passing year they’re increasingly more difficult to spot across the state, and the trend is continuing. Scientific studies tell us that if we don’t find solutions to climate change and take immediate action to implement them, the Red-headed Woodpecker will be forced out of the state.

These days, it can sometimes seem like there is little that people can all agree on. However, a new poll released by Audubon Great Lakes found a topic where Hoosiers are aligned: renewable energy. Voters in Indiana, regardless of political orientation, overwhelmingly support having more renewable energy in Indiana.

That’s good news for people and birds in Indiana, since adopting renewable energy is critical to reducing pollution, lowering global temperatures, and preserving the places that birds need to survive.

Audubon Great Lakes partnered with Public Opinion Strategies, a prominent Republican polling firm, to survey 600 voters about their views of renewable energy, as well as the policies that enable its growth.

Scientific studies show that climate change is the biggest threat to birds and people alike, with two-thirds of North American bird species at risk of extinction due to a warming planet. Indiana currently supports over 208 bird species that depend on the state’s forests, grasslands and other natural areas to survive. However, if we do not take strong action to address climate change, many of these species will face extinction or be forced out of Indiana to find more favorable habitat.  Audubon supports the creation of a clean energy infrastructure that minimizes harm to birds and wildlife – this investment is essential to protect the birds we love.

One example of an important renewable energy policy is net metering - this program allows homes, schools, churches and businesses with renewable energy systems, like solar panels, to sell the extra power they generate back to an electric utility company for the same price that the utility charges us to buy the electricity.

The polling also found that 75 percent of Hoosiers, including an overwhelming majority of Republicans, Independents and Democrats, support net metering policies. In spite of its popularity, this policy is set to expire this July in Indiana and will be rolled back to a program that does not provide fair compensation for the extra energy that residents with rooftop solar panels generate.

Additionally, House Bill 1136 will extend net metering into 2025 and expand access to even more Indiana residents and should be supported to encourage even greater renewable growth.  The more of these popular, bipartisan policy solutions that are enacted, the more resilient our state will be to climate threats and the more we can drive investments into our local economies to create a brighter future for all Hoosiers.