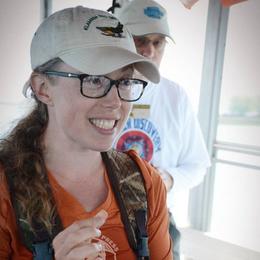 Fall is a magical time here in Michigan as waterfowl, shorebirds, waterbirds, songbirds, and raptors head south to their wintering grounds. Michigan is a particularly special place during this time of year because we lie at the intersection of the Mississippi and Atlantic flyways, two migration “superhighways” that bring over 380 bird species through the state each fall!

Waterfowlers and birders flock to Michigan’s premier wetlands in fall to experience waterfowl and songbird migration in action. Wetlands act as important resting and refueling zones for migratory birds and are one of the best habitats to visit during spring and fall migration. Wetlands provide birds with water, food, and shelter during this demanding part of their life cycle.

In preparation of your birding trip, it’s important to look at the weather forecast. Not only do you want to be prepared with proper rain gear if poor weather is expected (which can actually be a good time to look for some species, like Jaegers), but looking at winds and other weather events can help you predict when large movements of birds will migrate through Michigan’s remaining six-million acres of wetlands.

Cold fronts are the most important weather feature to track. Storms often precede cold fronts, which cause migrants to hunker down until the poor weather passes, often resulting in an awe-inspiring migratory movement known as a “fall-out.” Cold fronts also tend to have northerly winds (which blow north to south), which aid our feathered friends in their southward migration. Check your weather radar regularly this season, or check out BirdCast: a special forecast that predicts which birds will be moving near you!

Here’s what to expect over the next few months in Michigan:

Want to see the wonders of bird migration in action, but not sure where to start? Learn more about Detroit River Hawk Watch and Mackinac Straits Raptor Watch, and plan your visit today! Take a trip to one of Michigan’s Important Bird Areas, most of which are on public lands, or tour one of Michigan’s Birding Trails, and submit an eBird checklist this fall!

MI Birds is a public outreach and education program created by Audubon Great Lakes and Michigan Department of Natural Resources. Birders and hunters share similar conservation values, but rarely cross paths. MI Birds aims to bridge the divide, and deepen all Michiganders engagement in the understanding, care, and stewardship of public lands that are important for birds and local communities.