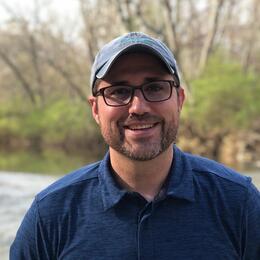 It’s been a busy winter at Powderhorn Lake forest preserve on the south side of Chicago. This winter, restoration and construction crews working with Audubon Great Lakes and the Forest Preserves of Cook County have been busy kicking off a major restoration project that aims to improve circulation/drainage and promote marsh habitat. Reconnecting Powderhorn Lake to Lake Michigan, via Wolf Lake, will facilitate fish passage, create hundreds of acres of marsh bird habitat and assist in alleviating flooding issues.

Last fall, an official groundbreaking ceremony for the project was held on September 18, 2021, and since then major construction has been in full swing during the winter. It’s often beneficial for intense wetland restoration to take place during the winter months, while many species of migratory birds are away and the frozen ground can support heavy machinery.

In order for the restoration team to connect Powderhorn Lake to Wolf Lake, the construction crews are digging a channel that connects the two water bodies. Some places will have open water/creeks and others, like under the roads and railroads will have large diameter pipes (big enough for fish and turtles to pass through). The connection is happening between 133rd and 136th streets just south of Wolf Lake.  Construction will likely be complete in the next month with final grading, topsoil spreading, and landscaping completed by May.

The connection will restore the historical hydrologic connections between Powderhorn Lake and Wolf lake, helping to reestablish the vital marsh habitat that birds like the Least Bittern, Common Gallinule and Pied-billed Grebe rely on to successful reproduce and raise young each summer. Powderhorn Lake's northern shallows will once again act as an effective fish nursery, while the connection to Wolf Lake will allow fish to move between lakes, bolstering populations of game and non-game fish, including Northern Pike, Yellow Perch and Grass Pickerel.

Later this summer Audubon and partners will host a ribbon cutting ceremony and a public celebration event where the community will be invited to join and tour the new habitat.  The community will also begin to see habitat benefits by spring of 2023, and the lower water level also will help alleviate flooding issues which have severely impacted the surrounding neighborhoods for many years.

Later this summer Audubon and the Forest Preserves of Cook County will also be hosting volunteer workdays for local community members that would like to get involved and help with some of the restoration and planting. In addition, there will also be seed dispersal and tree plantings next Spring 2023 and planting of trees and scrubs in later fall and early winter of 2023.

Funding for this project is provided by the Great Lakes Restoration Initiative (GLRI) and U.S. Environmental Protection Agency through the National Oceanic and Atmospheric Administration (NOAA)/Great Lakes Commission Regional Partnership.